HR Application Standards: Taking the HR Standards to the workplace by Marius Meyer

While the National HR Standards has entered its fourth year in 2016, the year 2013 will be remembered as a crucial turning point in the history of HR in South Africa. While many top HR professionals have done excellent HR work at leading companies all over the country for decades, these pockets of excellence never became the norm given the absence of National Standards. With the National HR Standards Initiative launched by the SA Board for People Practices (SABPP), HR as a profession has embarked on a journey to standardise and build the HR field with clear national standards for consistent high quality practice.
The purpose of the HR Standards project was to standardise HR practice with clear guidelines to apply good HR standards in a consistent, coherent and integrated manner. For instance, the principles and practice of Talent Management should be applied in a consistent way, despite contextual and cultural differences between organisations. Ultimately, the goal of the HR standards project is to establish HR as a fully-fledged profession like accounting, psychology or engineering. Without explicit standards of practice, it is unlikely for HR to emerge as a recognised and credible profession.
However, the reality is that while other professions are used to standards for decades, the notion of HR standards is a new phenomenon and most HR professionals are challenged to adapt their thinking and practice to understanding and applying HR standards in the workplace. Hence, the need to obtain a good understanding of how the HR standards were developed. The standard development process consists of three phases as outlined below:

Phase 1: Development of HR System Standard (the overall systems framework with the 13 elements);

Phase 2: Development of HR Application Standards (detail on “how to” apply the 13 standard elements in the workplace); and 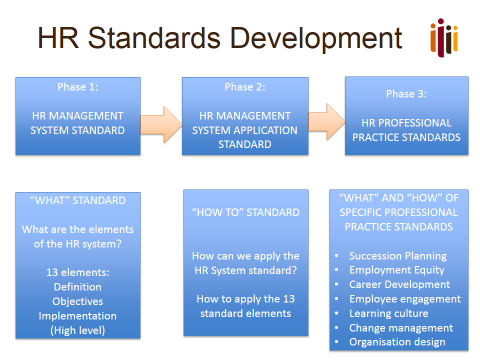 The first two phases have been completed in 2013, and the third phase, i.e. the development of HR professional practice standards commenced in 2014 and continued in 2015 and 2016 with further standards developed.

Phase 1: Development of HR System Standard:
On 21 May 2013, a 108 HR directors and eight HR professional bodies and associations under the leadership of SABPP and HR Future Magazine gathered in Johannesburg to set national HR standards for South Africa. A total of 13 groups were formed (13 tables for the 13 standards) for senior HR professionals from leading companies to generate the standards, based on three components:

At this historic session, there was a collective realisation and commitment that as HR professionals, we owe it to our clients, and other stakeholders within and outside our organisations to drive a framework for high quality HR work. SABPP and HR Future were driving this process and staying in close contact with the HR community to ensure that they are involved in the generation, consultation and finalisation of the standards. The following model depicts the 13 HR standard elements:

This project is the most profound national HR project in South Africa ever. Setting proper HR standards for South Africa will not only raise the level of professionalism in HR, but will also improve the quality of people practices in organisations.
Building on the initial development of the National HR Standards (The overall HR Management System with its 13 standard elements), the first HR Standards Roll-out event took place on 20 and 21 August 2013 in Krugersdorp, in addition to hearing case study examples from organisations that have good practices in each of the 13 Standard areas, and worked on implementation guidelines. This conference was a huge success with a total of 468 HR managers from all nine provinces and four other countries attending. Also, the project attracted significant international interest and the standards have now already been launched in Zimbabwe, Lesotho, Swaziland and Zambia, with further interest shown from Kenya, Botswana, Liberia, Namibia, Malawi and Saudi Arabia.

Phase 2: Development of HR Application Standards:
The second phase consisted of the development of HR application standards to help HR professionals in applying the 13 HR standard elements in the workplace. While the Phase 1 Standards focused on the broad aspects of the particular standard element, such as Strategic HR Management, or Talent Management, the phase 2 standard addresses the “how to” of the standard element. In other words, how companies should apply the HR Standards in practice. For instance, now that we know what talent management really is, and what the overall objectives and implementation framework entail, HR professionals are guided on how to make it work in practice. This phase was done by gathering inputs in brainstorming sessions from all the delegates at the Standards Roll-out event in August 2013. From the delegates’ inputs, the draft application standards were prepared by the SABPP office and as at October 2013 were out for consultation across the profession. On 30 November 2013 the HR application standards were signed off.

Given the broad level of HR professional participation and the excitement the standards generated, several awareness sessions were held to engage HR professionals on this exciting journey. Almost a 1000 HR professionals contributed directly to the development of the standards and first round of awareness sessions. In addition to the first eight institutions, a further sixteen HR and associated professional bodies and industry forums have directly or indirectly supported or contributed to the initiative, thus expanding the overall reach to more than 15 000 HR professionals. This year I want to congratulate and thank a new group of companies joining the HR Standards journey by empowering their HR teams with in-house sessions in getting to grips with the HR Standards. These organisations are as follows:

While some of these organisations are newcomers to the HR Standards journey, some of them have already been audited against the national HR standards, congratulations to Umgeni Water, Mondi and Interstate Bus Lines for leading the way. Getting your HR teams fully trained on the HR Standards like Distell, Gibs, Rand Water and SABC is the best way of ensuring that the whole HR team is united in applying the HR standards in a consistent and united way.

With a consistent framework for HR practice, the HR profession in South Africa has for the first time being formalised with clear standards for professionalism. The HR Application Standards provide explicit guidelines to HR professionals and organisations on how to implement the standards in the workplace. Tomorrow I will update you on phase 3, i.e. the HR Professional Practice Standards.